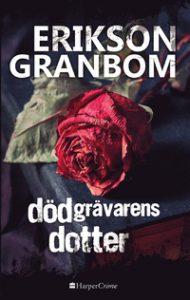 The undertaker Rita Benson has hit rock bottom: her father is dead and her husband left with all her savings. The only thing she has left is the children and she has to get the funeral business up and running again for their sake.

Meanwhile a serial killer terrorizes Arboga. The police have no clues, by a coincidence Rita tracks down the killer. She sees a way to save her income and the business and therefore makes a plan. Although nothing turns out the way she imagined, she pretty soon realizes that she no longer can control it.

Reviews on the previous book about Rita;

“I see at once that this author duo knows what they are doing. Fast pace, short chapters, and something new and original, namely a detective story with an undertaker as the main character.

It feels like they've found something really good and "own" here.”

“It is rare to encounter a Swedish crime novel that feels like something entirely new, but this is actually the case with “Earth to Earth, Ashes to Ashes”. The uncommon protagonist, the desperate but determined Undertaker Rita Benson, is a really welcome addition in the Swedish detective flora.”

“The couple Erikson-Granbom have achieved a well-written funny and exciting story that sometimes is scary but just as often cozy. The authors have put extra effort on creating compelling characters.”

“So well written, delightful twists, fun twists, it is a long time since I felt such a sense of pleasure while I was reading, delightful characters ........... just say one thing, read this.

Very black humour and a lot of laughs amid the corpses and marriage crises.

Think this could appeal to as well traditional detective readers and to those who prefer gentler stories as “Kaffe med rån” (The Little Old Lady Who Broke All the Rules).”