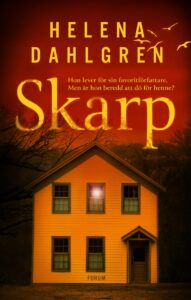 The last few years have been rather messy for literary scholar dropout Emma Wijkman, but when she receives a residence scholarship in northern Sweden, she sees it as her chance at a fresh start. After having spent almost half her life reading her books, Emma will, at last, be allowed to stay at the old farmhouse where her favourite writer Beata Skarp lived and wrote her bestselling novels. There she will surely be able to finish her abandoned dissertation on Skarp, who died under mysterious circumstances in the late 1990’s. One at Svartforsen, Emma is drawn even deeper into Beata Skarp’s world than she had excepted. The more she finds out about Skarp’s last years in life, the more entangled she becomes. In the end, only two things remain. The truth about Beata Skarp’s death – and the truth about Emma herself.

“This is the best read so far by Helena Dahlgren because of the creeping suspense about who really is inside the fictive house of Beata Skarp. And above all for the love for reading that runs like a common thread through the novel” – Lotta Olsson, DN magazine

“A modern Gothic masterpiece” – Camilla Sten, author of The Village and The Resting Place

"Dahlgren has written a suggestive page turner that has references to both horror and crime novels. Foremost it is a well-written and suggestive novel about obsessiveness. A true highlight!"  - BTJ library services

" It's at the line 'Everything is literature to you, Emma? I just think that the Moomin troll is sweet, nothing else,' as one understands that dark things will happen in Helena Dahlgren's wonderful novel Skarp. The thoughts are drawn to A.S. Byatt's satirical hit novel The Obsessed from 1990, where two researchers find letters that reveal a secret love affair between two Victorian poets (Cristina Rosetti and Robert Browning in thin disguise). "Who Beata Skarp really is, I leave unsaid, but Dahlgren mixes a speculative tone, the thin margins of a contemporary woman's life with a superb sense of style when she makes the boundary between Beata Skarp and Emma Wijkman so porous that literature becomes an immersive everything." -Ulrika Milles, SVT Kultur

" The author's love for the written word shines so brightly! Skarp is like a mash up of Agatha Christie and Twin Peaks. Dahlgren has her very own voice that makes it possible to identify a text like hers. "-Helen Lindholm, Läsa & Lyssna
”Exciting, bursting with winks to both literature and popular culture and with a bit of ghosts as a spice. The boundaries between fiction and reality become increasingly vague and without revealing too much, the stay in the house in the village where there is no network coverage, the river is roaring and the sun shines all night is not what Emma expected. I love the connection to reading, writing and literature and would have immediately started looking for Beata Skarp's books on the bookshelf if she had really lived. " - Anna Johansson, book blog "Och dagarna går..."

“Skarp is a really nice thriller for the literature lover, but I also think that it is exciting enough in itself to be able to suit everyone who is not as snowed in on whodunnits and to live in the literary world. It's a good book simply, perfect to disappear into on a sunny spring day like I did.
Although I'm still upset about not being able to follow up with reading Dark Harvest or something else by Beata Skarp. " -  Fiktiviteter, book blog

“Skarp has echoes of Maria Lang and Christine Falkenland, Maria Gripe and Stephen King, Twin Peaks and more. Here are lots of fun winks and references for the book and culture nerd to pick up. There is also a suspense story, an undercurrent of darkness that draws and attracts. Gothic in the middle of Norrbotten's deep forests.
But that’s not the main thing according to me, - it has that big, passionate hunger and love for books and reading. The type of love that makes devour text as if life hung on it - and it does, not only for Emma in Skarp, but for all of us. This is a book for us who love books, to the point of obsession - and sometimes a little above it." - Therese Widenfjord, Author and Editor

" Helena Dahlgren has written a book for us who really love to read, for us who become obsessed with an author and who always seek comfort and try to find ourselves in literature." - @feelbadbibliotekarien

”A really cozy gothic thriller that takes place in Norrbotten and which has, among other things, many references to Stephen King, such as that it is about a writer and a fan, about writing and about obsession. I read it during the Easter weekend and could not put it down, a very readable little gem that crawls under your skin ... " -Göran, Akademibokhandeln Mäster Samuelsgatan

" What a great novel! Scary, smart and moving. And genuine fun read, something that is rare these days." - Therese Bohman, Author