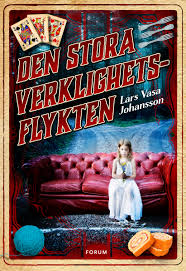 In The Great Reality Escape forest literally calls for help, and to the rescue comes Anton, an ego-tripped magician who mostly focuses on himself.

We are too weak, she thought. We are too few. We are too old. Daring courage is what we need. If not from our rickety bones, perhaps from someone on the outside? At a pinch maybe we could consider sacrificing someone from the outside?

The queen of the forest stretched out flat on the table and yawned. Perhaps it would be best to sleep on it? Up to now it was only a rumour after all. A cautious whisper murmured in the wind:

The Tear-jerker is back."

The misanthropic magician Anton, whose life is a failure he wouldn’t admit will undergo a very special therapy in the deep Tiveden woods. It starts late one evening a day in June.

For Anton it is a special day, it is his birthday and also the day before midsummer. He is driving home in the dark after a performance in a retirement home. The dark is darker than usual and suddenly Anton collides with a red chesterfield couch. For some strange reason he is lost in the Tiveden woods. That was not his route home. Tiveden woods are known for their deep secrets, a perfect hiding place through hundreds of years for everything from witches to criminals.

Anton sets of to get help, his car and cell phone are both crashed. Just as he sees a light from a small house, a little girl approaches him and asks him to help her to pick some flowers. When Anton explains that he can’t help her, he needs help himself, the little girl looks at him with a grim look upon her face. Anton finds it strange that such a young girl could act like a diva, and from that moment, without realizing it - he is cursed.

In the little house Anton is taken care of by Gunnar and Greta, they look at his face where a chair coal cross is growing and quickly give him a piece of Swiss roll, a cure against all types of evil. Anton, doesn’t believe in magic nor in curses . The old couple tells him that from now on he will experience three horrible things every day, unless he tries to brake the curse, one way could be buy helping them with a few "things".

Anton will be forced to face the Forest queen, get therapy from a ghost and eat a lot of Swiss rolls. Three challenges will meet him. Two of them sounds tough. The third – to move some flags along the walking track in the national park area - sounds like the easiest chore, he will save it to the last. Anton is drawn into a battle between good and evil where his own personality turns out to be his worst enemy. And near that trail in the national park where the flags should be moved, the Tear-jerker is waiting for him.

"A wacky, humorous novel with seriousness below the surface. It is one of the oddest novels I have read, and that was how it was reading Jonas Jonasson's The Hundred Year Old Who Went Out through the window and Fredrik Backman's A Man Named Ove. /../

Anton is a intolerable, and the reader realizes immediately that he is unsymphatic, self-righteous and a total failur. You can identify and I read on immensely amused and more and more fascinated. Why did Anton abandon his best friend Sebastian? And why did he leave the girlfriend Charlotta? It is a fantasy novel, in one way, with all manner of supernatural characters involved. Tiveden's forest proves to accommodate a considerable crowd goblins and strange beings./.../ It is also a book that sneaks up on its readers. In the beginning it is a merry tale, but gradually something changes. One can certainly read it for entertainment (as an escape from reality), but there is so much more under the surface for those interested."

4 out of 5. It is a feelgood novel making fun of different genres. It is written in a very good mood and you have lots of fun while reading.

The Great Reality Escape is an amusing novel. Sometimes humorous books are a bit too much "fun", but Lars Vasa Johansson manages to keep the right balance between slapstick and dissatisfaction with life. I also like the strings of childhood grief available throughout the novel, they provide just the right counterpoint to the humor and vivid imagination. "

“Feelgood in the primeval forest. This is not how a Swedish debut novel usually looks like. It is filled with goblins, beings, ghosts and witches. Magic swiss roll and some moralizing cookies to chew on. A Fredrick Backman goes Gandalf – and the result is really entertaining.”
M-magazin
“ A Laugh-party in the reading chair. Do you like novels like Jonas Jonasson’s The hundred year old that went out through the window, A man called Ove by Fredrik Backman or Michael Berstrands Dehlis Most Beautiful Hands? Reading when you on the same time draw a smile on your face as you also feel the sincere depths all the way in to the roots of your hearth. Then these 385 pages are written for you! If you also feel fascination of deep forests, old Swedish folklore and myths, well, you will be spellbound in the reading chair”
Bonniers book club

"I really like the mix of reality and humor and an alternative reality with goblins and beings. It is very well balanced. Lars Vasa Johansson has succeeded in finding something own with this mix, it is very delightful.

"What if Jonas Jonasson and John Ajvide Lindqvist got a love child together? And consider this son following his successful fathers’s footsteps and mixes his father Jonas’s feelgood humor with the fathers John’s horror and magic realism, wouldn’t you be rather curious to see how it turned out?
This is wonderfully twisted. And really fun.
And if you on your next deep forest walk would run into  a small girl who asks you for help to pick seven different flowers to put under the pillow. Then I recommend you to use some of your valuable time and do it. Trust me. It will be much easier that way."
Bokboxen

Reviews from the French readers