Brynjulf Haugan grew up in Nelson, British Columbia, a small, quaint town at foot of the Canadian Rockies. At the age of eleven, he and his family moved to Norway, which has been home ever since.

Brynjulf’s interest in East Asian martial arts, philosophy, and medicine started at an early age, beginning with Karate, then leading him on to study Acupuncture, Qi Gong and Tai Chi.

A lifelong history enthusiast, Brynjulf is especially fond of all things Viking and Norse, however any kind of ancient history will likely wake his interest.

Brynjulf lives in Moss, a small town just south of Oslo, with his family of four. When he’s not writing books with Brian or hanging out with his family, you’ll most likely find him at his clinic, where he’s been working the last 25 years or teaching Tai Chi to eager students throughout South-Eastern Norway.

Brian M. Talgo, an ex-pat New Yorker, has been writing since childhood. His first novel, The Beauregarde Affair, was published by PfoxChase in 2011; his writing has otherwise appeared in various anthologies published in Norway and abroad. Brian was a founding member and lyricist of the now-defunct Norwegian prog-rock collective Gentle Knife. He has since continued to work in a solo capacity, composing electronic and ambient music.

Inspired by his Norwegian roots, his youthful fascination for Vikings and the Norse gods eventually led him to the classical Islandic Sagas, which he has drawn upon while seeking to recreate the Old Norse atmosphere of The Lost Viking Saga.

Brian relocated to Norway in 1981. He currently lives on the outskirts of Oslo together with his family amidst a veritable jungle of house plants and three insolent cats. Educated as a vegetation ecologist, he has been working within the University of Oslo’s central administration since 2008.

Learn more about the authors through this four part Interview: 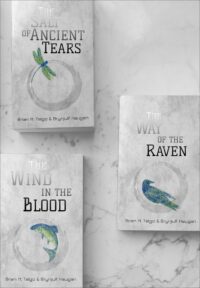