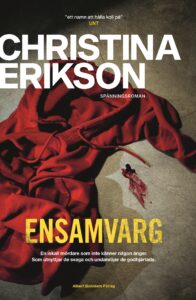 Early one September morning, a dismembered body is found by a recycling centre in central Stockholm. When Detective Inspector Elias Svensson begins to unravel the victim’s history, he discovers a much larger, and darker story. It would seem that vulnerable immigrant youths are being sexually exploited, and someone is willing to kill to make sure that the truth is never uncovered.

Meanwhile, the author Cornelia Lind, who we met in the first book, is still fighting her ex-husband in court in a tangled child custody case that is proving worse than she could have ever imagined. She is also trying to assist the police with her unique insights into the criminal mind as a profiler on psychopaths.

And in the shadows, someone is watching. A secret organisation with no respect for the law, who threatens to take over where the police’s authority ends.

"Wow, what an amazing book! Christi􏰀na Erikson has done it again...It’s incredibly well wri􏰁tten and chilling, and I’m already looking forward to the next book in the series. If you haven’t read this one yet, do so right now! You won’t be disappointed." - Deckarhyllan