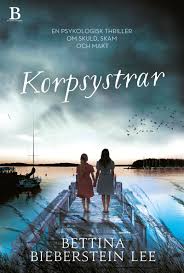 The journalist Hanna Axelsdotter is passionate about solving women’s issues and she can’t put the case about Nora behind her. The young woman is just about to be released from a long penalty in prison. Hanna remembers Nora's cold and emotionless appearance at the trial that she was doing a report on. The beautiful face without a trace of regret.

Hanna decides to interview Nora in prison in an attempt to understand what led to the violent act that put her in there in the first place. In front of the camera Nora tells the story of her and her sister Linn’s childhood. A story about guilt, shame and the balance of power. How can Nora make up for what she did to her sister that led to their separation?

The Raven Sisters is the first book in a series of stand alone novels about the Journalist Hanna Axelsdotter.

”Oh how she writes, Bettina Bieberstein Lee! A book that is nearly impossible to let go off. About Nora who is in prison and tells her story to a journalist. Nora and her little sister where inseparable as children, until the catastrophe hit. After that they didn’t see each other for several years. Nora living on the edge of danger while Linn became a kind hair dresser who married an remarkably older man. But once they met again nothing was as it seemed to be.” -Lotta Olsson, Dagens Nyheter

”The reader gets to dive into this psychological suspense about shame, violence and sisterhood – about the two sisters Nora and Linn, their broken childhood, how they were separated and how they are reunited. The Raven Sisters is a dark and suspenseful novel that really sparks the reading interest.” - Fam Kinell, Damernas Värld

“The Raven Sisters is a dense and edgy debut about two sisters, tied to one another even though they haven’t met in 15 years. Impressive language. Past and present are neatly tied together” – Kerstin Serneö, Tara

“It’s a suggestive novel that Bettina Bieberstein Lee has accomplished. Sometimes it’s so strong that you have to put the book away for a while just to catch a breath. But the longing to find out what we will happen makes sure you’ll be soon to pick it up again.” – Elisabeth Carlsson, Dast Magazine