Heart-twisting good reads with focus on each and everyone's originality 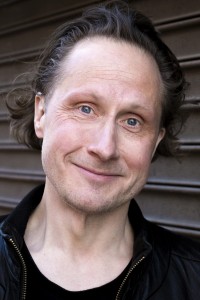 PK Englund is an observer and listener by great measures. A giddy feeling arises in places where he with just a few words is able to portray great emotions and events. A text free from posturing - naked and awake.  He comes close to the reader with the warmth and confidence in his tone. The comforting narration pilots safely through the fascinating characters' lives, ordinary people and events of both big and small importance - a readers joy.

PK Englund lives in both Örebro and Stockholm, and has worked as a journalist for nearly 30 years. Among the author's own favorites are Paul Auster, Siri Hustvedt and Mikhail Bulgakov, whose The Master and Margarita is almost read to pieces. PK Englund chose the job as a journalist because it was a great way to be allowed to write and still keep an important promise; to never, never ever become an author. This way he could avoid the destiny of his eccentric grandfather who wrote a book when he was young and then worked with the same masterpiece until he died - without ever finishing it. Now PK has broken his promise, but it still feels okay. As a matter of fact, it feels so good that he has already writing another script.

PK Englund about his debut novel Born on a Sunday (published by Norstedts spring 2015):

But most of all, it's a positive story about finding something magical and nicely in the middle of everything that is ugly and making sure it never disappears; not even when the pressure pulls it away. And it is a story of how broken people together manage to gather so many pieces that they can create a pleasant puzzle without having a clue of how it works.

It is a book about survival and about making valiant attempts to live and how tiny successful people can be without anyone expecting it. And everything is true, it just hasn’t happened yet. "