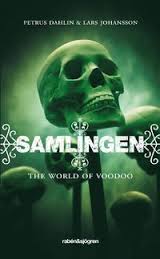 Ruben is looking forward to a peaceful and comfortable summer along with Miranda, the girl he's in love with. Although he does miss Shadow, it's quite nice not to be involved in an ancient conflict between two West African clans fighting each other with voodoo.

Shadow is on her way home to West Africa when she hears about a collection of Bizango warriors which according to the rumor, are  hidden somewhere in the French countryside. These statues are filled with powerful spirits and Shadow realizes the warriors can be used as a magic weapon and could be absolutely crucial in the fight for freedom back home.

When people start dying under mysterious circumstances, Shadow understands that her enemy Zouzou is searching for the collection as well. Alone and desperate she contacts Ruben and asks for his help. Ruben goes to France and once again he becomes embroiled in a battle to the death.

Meanwhile in Sweden, Miranda has started to experiment with voodoo, and she finds that there is a dark and sinister connection between herself and Shadow.

The World of Voodoo series continues with an equally exciting sequel as the first book Shadow. Books about friendship, love, voodoo and betrayal.

"Once again Dahlin/Johansson have written an incredibly good book. There is suspense, mystery, some horror, teenage love, indecisive young people and much, much more all in one. It's so good!"

"In the YA literature flood of supernatural books, there are very few elements of voodoo and tribal magic, but here goes: So far two parts are published, Shadow and The Collection. Shadow an African girl, skilled at voodoo and at the same time on the run from a thousand year old tribal conflict, which threatens to devour her life, meets Ruben, the good-natured guy from humble background and the paranoid rich man's baby Miranda. Not only does it sparkle in the relations between the three eccentrics, but while their lives are woven into each other, voodoo thrives with its rituals and the ever vibrant spiritual world, this too on life-and-death. Fascinating and tantalizing."

"It is impossible to put the book down. For one, the personal gallery and relationship portrayals are fascinating. Secondly, the ever-present spirit world and voodoo atmosphere devour the reader. What happens is exciting and realistic and one would like to live in an equally significant, albeit kinder, spiritual dimension."

"I wanted to jump right into the book and warn Shadow for trusting the enemy. I hate the feeling of knowing the main character is going straight into the lion’s jaws, without knowing it, and you so want to warn them but you know it is impossible… I got that feeling here, which is a good thing because it means I really care for the character."