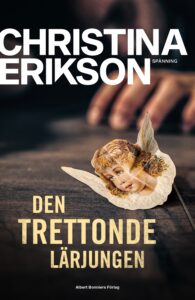 A man stumbles into the police station in Oskarshamn, covered in someone else’s blood but with memory loss. Not far from the station a corpse is found in the woods. Elias Svensson and his colleagues from the police office in Stockholm are called in. They soon discover connections to a health resort, where clients range from the upper class to the dregs of society.

Author Cornelia Lind is brought in to assist the police by profiling psychopathic behavior while trying her best to balance her chaotic private life. Her expertise within the group is to catch what the others miss.

The police will be reminded of the repercussions that the misuse of power can have on the people involved. Once again, a mysterious someone assists them in their chase.

"This is a particularly skillful written novel with parallel stories and sorrowful life fates that depicts how miss-use of power, greed, drugs, fanatic religious views and contempt can destroy lives.” – BTJ, library reviewer, no 16 2020

“I really liked the previous book by the author THE RISING DARK but Christina Erikson has outdone herself with this book! It’s apparent that the author has her own solid knowledge about psychopaths and how people with psychopathic behavior use their lack of empathy and conscience to control others. 5 out of 5.” – Anna Vellet, @paddan75, Instagram