Puppet on a String (Vanmakt) 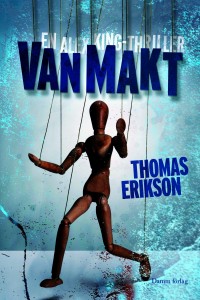 Calm, collected and clear-sighted, William Smythe is a diplomat, trained to take an unswervingly logical view of the world. Then his ten-month old son is kidnapped – only to be returned to the British embassy shortly afterwards.

This is just one in a series of kidnappings and threats affecting the diplomatic family, its members often returned unharmed – but not always – only for them to disappear again just as fast. One moment the whole family is united, the next scattered in the wind. someone wants to show off their muscles – someone who’s used to getting their own way and will resort to any means to get it.

Behavioral scientist Alex King accidentally gets drawn into this frightening family drama as he works with the police to try and chart the motivational forces behind these atrocious assaults. Can he pinpoint who might be capable of carrying out these inhumane and carefully calculated displays of power? And most importantly, can he find out why?

Puppet on a String is the third stand-alone title in this spine-tingling thriller series about behavioural scientist Alex King.

"Puppet on a string is the third book about King, and just as the first two books Thomas Erikson's characters are based on the four colors in the DISA method and he gives them a believable complexity that makes them feel alive. He combines it with a great flow in his language and good intrigues. The end result is hard to resist." - Krisitanstads bladet