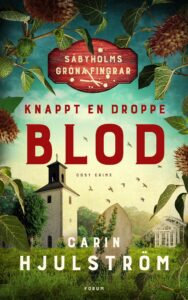 In this standalone second part of the cozy crime series we get to follow the actress Siri Ehrensvärd with high recognition, humor and even darkness. She recently changed her life and switched from the Drama's big stage for a quiet life on the countryside. There she runs a plant school by the waters of Lake Mälaren with her nephew Anton - an orphan, former juvenile delinquent.

When an elderly man is found dead, probably murdered, in the cemetery next to his wife's grave, local police Olle Magnusson is involved in the case, and in the search for a murderer, he gets help from Siri. The deceased, the lawyer Isak Beyer, turns out to have had insight into unknown documents and events from the past that, to the annoyance of many, are now at risk of being revealed.

Part 2 In Carin Hjulström's cozy crime series Säbyholm's green fingers were readers are met with sudden death in a castle environment in a true "Whodunnit" storytelling.