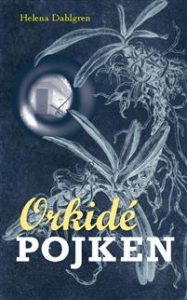 When Hanna and her best friend Zeb has graduated from senior high school it is finally time for the REAL LIFE to start. It’s now they shall leave the outrageously boring suburb of Tyresö and see the world. London is calling.

But first a last summer at home when they work at the Church’s graveyards, party on the city’s gay clubs and inertly watch the favorite television series Twin Peaks and follow the mysterious blog by The Orchid Boy.

When their schoolfriend Lina disappear, everything changes and nothing becomes as they have expected. Though more awake then ever life passes them by, their minds only glance, hardly reflect deeply, fleeting through as if it is all a play and their role isn’t yet chosen.

The Orchid Boy is a dark and suspenseful story about loneliness, obsession and belonging inspired by the universe of Twin Peaks.

"Well written and well portrayed, I look fordrad to her next book" - Lotta Olsson, DN

”Helena Dahlgren’s The Orchid Boy is a diversified and rare story about things that got broken before it had grown enough, about innocence and lost of innocence, about the unmentionable. Out of the cracks in everyday life nameless evil trickles out, voices from somewhere else, Dahlgren tempts and draws the reader in with her obvious and close approach. With her unfailing feeling for suggestive atmosphere she depict an afterwards when everything it too late. And out of the text a darkness reaches out to grab us.”

"The first pages in the book is some of the best thing I have read in a long time, and the rest is not to shabby either. It is dark, suspenseful and you know the don't-want-to-stop-reading kind of book. It also sort of reminds me of my favorite Swedish TV show 'Jordskott' from SVT which just makes it even better" Nadines bokhylla, book blog

”The Orchid Boy takes place in 2011, but it could might as well be the past, present or the future. The time is flowing. It floats through her language, the prose that flows like glowing water through this story about that type of loneliness that coming of age brings out.” – Madeleine Bäck, author

”The Orchid Boy takes place in present time, in a young persons reality. Helena Dahlgren adds flavours to her story with a lot of references from popular culture, especially to the TV-series Twin Peaks. She captures the youthful curiosity, the feeling of being the first in the world to discover the greatness in a song, movie or book. She also manages to capture the isolated and slightly narcissistic, that goes on in the isolated bubble and is allowed to be gigantic in its proportion. Things that relate to youth. The story is written with an intensity, and I really appreciate that Helena Dahlgren takes on the short format that in some ways is so much harder than the width allowed within a longer text. Instead she is concise and the words weigh heavily on the golden scale.” 4/5  Johannas Deckarhörna

"... It is sprung from this darkness that the novel - if it even is a novel - has been written. Or rather: from this darkness. To get out from youth with yourself intact, that is what the novel is about. If it is a novel, yes. To me The Orchid Boy is rather an expression, an emotion, a wild volition, that I believe many will identify with."- Bengt Eriksson, Deckarlogg

"There is a sort of David Lynch feeling resting over the entire story... A sort of threat that you can't grab onto but you know it's there... And this is what Helena Dahlgren does best - creating the mood" Oarya book blog

"You can read the Orchid Boy just as a dense story about a disappearance, straight up, and it works well. And then you can also read it as an atmospheric novel that contains a lot of references to pop culture  which adds layers to the story. You can also read it as a novel with supernatural elements. However you choose it is a skillfully constructed story that cherishes its characters. Without embellishing any of them. The author allows for her love to her characters and song, movies and work she admires to shine through in a very sympathetic way throughout the book." Bibliotekskatten, book blog