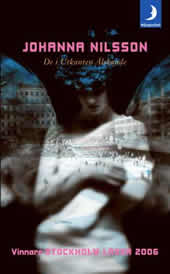 This novel tells the story of a group of strange individuals and how their lives and fates will intertwine and at times bisect each other. An unhappy transvestite who wants to become a woman falls in love with a young woman who dreams of becoming a fashion model. A female thief who suffers from depression is unhappily in love with her doctor, who in turn is still obsessed with his former girlfriend. A handicapped street musician, hoping for success as a singer-songwriter, is in love with the thief. Another man is inflicted with stomach cancer, and a fat woman suffers from being a chocoholic. And so it goes.

“Johanna Nilsson’s book is an emotion-filled chamber play, a wonderfully composed quartet, where the themes and motifs flow ….all variations of one and the same lyrical and melancholy state of loneliness and longing for love…in the hands of the right director this book will definitely mean Johanna Nilsson’s breakthrough into a much larger sphere.”

“In depicting this chain of human pain, there is a pathos which reminds me of Björn Ranelid – the same furious morality and the same unconditional solidarity with those who don’t fit in to the norm…Johanna Nilsson is on the way to finding something extremely valuable: her own voice.”

“Johanna Nilsson has entered a new phase in her work, and she has found a path where her predecessors were Lars Ahlin, Birgitta Trotzig and maybe even Björn Ranelid.”