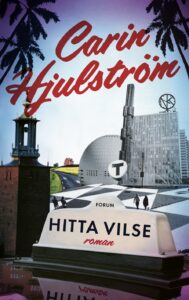 When Frida Fors, in competition with hundreds of others, becomes employed at the evening newspaper Aftonpressen's newsroom, it feels like revenge. Finally, she will avoid short-term vacancies and uncertainty and move to Stockholm, the city where everything happens. She envisions a life full of exciting jobs, friends and hopefully love.

But nothing turns out as she intended. She has barely had time to start before she has to stop. Last in, first out is the hard lesson. Suddenly she is alone in a new city with a far too expensive second-hand lease apartment and no job in sight. Reluctantly, she is forced to seek new contacts, which leads her into unknown paths.

A reportage trip to Mallorca and an unexpected job offer makes her think about where her own borders go. To whom or which is it most important to be loyal, and what is she herself willing to sacrifice? In work and love.

Get Lost is a charming novel about an enterprising but lost girl who, on her tentative journey through the metropolitan jungle, finally learns that she must stand up for what she believes in.

"It's chick lit in Swedish. Everyday, more lingonberry drink than champagne. Anyone who liked, for example, Kajsa Ingemarsson's 'Love and Lemons' will surely also like Carin Hjulström. Carin Hjulström pushes the action forward as well as energetically bouncing, it will not be a dead minute ... Carin Hjulström has an ability to get the reader involved in Frida, who is a kind-hearted heroine in a slightly old-fashioned way. "

"... a book for days when you need something nice to land in. ... Finding Lost is a sympathetic book that will surely find its audience."

"Hjulström writes entertainingly, and at the same time gives a sharp picture of how tough life can be for young people in today's labor market. It is a jungle out there, only the strongest survive."

"You get carried away and learn the characters in the story. ... Hjulström ... ties the story together well and entertains."

"The novel is easy to read ... A good feeling remains even after I have put down the book."