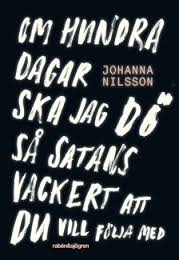 You can call med Ikaros. This is my goodbye letter to the world. In a hundred days I will die so God damn beautiful that you will want to come with me.

I exist. Today and for the next ninety nine days to come. The countdown has begun.

Seven people receive the email from the person who calls himself Ikaros. In the email there is a password for a blogg that continues to countdown because in exactly a hundred days Ikaros plans to end his life.

Two of the people who receive Ikaros email is Emil and Karim. Emil becomes obsessed. Who is Ikaros? and who else has access to the blogg? Emil must find the others to save Ikaros.

Karim is also affected by the email, but in a completely other way. Karim wishes to take Ikaros hand. He also wants to fly away.
The successful and award winning author Johanna Nilsson is back with a captivating story about loneliness and identity. How do you navigate in a world where everyone focuses on being seen? How to we cope with each other? And what is the price we pay if we belong to the invisible?

Johanna Nilsson on a very hot topic: depression/…/ she depicts a society’s shattered attitude to help others – here is both bravery, powerlessness and nativity. The theme is highly modern in a time where the privileged people’ life sharply contrast to those in need, and also her method to describe how we use the digital world and social media when we communicate.

"While Johanna Nilsson writes with respect about the longing to die she gives an ambitious psychological explanation to how such a dangerous wish can occur, while she also conveys convincing paths to going clear from the darkness and self destruction. (...) It's impressive. (...) Intelligent composition (...) engaging descriptions (...) Johanna Nilsson paints a very vivid image of todays society. (...) a sharp and all round view of the living conditions of young adults."  /  Peter Grönborg - Blekinge Läns Landsting

”Already impressing with the debut ...This time Nilsson uses the myth again but about Ikarus instead. It's a interesting approach that shows how important the myths still are.  It's a thrilling crime story, that suggests a possible solution to our society today that includes compassion and provides hope about a better future for our young adults. The language is rich, and shimmering. An important story with compassion about life at this moment, excellently composed."
- Gull Åkerblom (5/5)

”… the plot is brilliant. The theme feels very up-to-date in a period of time where people's privilege stand in contrast to the ones who suffer, and also the fact that it brings up: the way we are influenced by our digital world in our contemporary communication."
- Dagens Nyheter

”In a hundred days I will die... gives a very sharp and covers an all-round portrait about the living conditions for young adults in todays society."

”Johanna Nilsson has yet again managed to write a novel about exclusion and identity... A feeling a lot of us might recognize, and at least but not last out young adults who so far in their life have not dared to be who they really are"
- Bokkoll

”(…) an important book, about a subject that affects many of us... It's about identity and love. It's a serious and very thrilling story. It makes me think that those of us who are friends to someone who is not feeling well needs to be brave enough to show that we care. No one should have to feel that death is the only way out, even if it might feel like that at times."
- Superbrabok

”Johanna Nilsson is not afraid to write about the difficult things. SHe is skilful in the way she writes about sorrow, anxiety and very strong feelings in her youth adult novels.  (…) In a hundred days... is a very powerful novel worth reading! (…)  The best part of the novel is when Ikaros and Emil are talking about what you might miss if you no longer existed:

”Johanna Nilsson is a pro at writing in a way that hits you in the stomach, I feel like crying and I am happy at the same time. (...) an important book that while you're reading it you don't know exactly where it's taking you. "
- PrickigaPaula

”(…) affects you right in the softest part of the heart. (...) this is a book that leaves me with a lot of thoughts. Especially I think about the people we see everyday without actually seeing them. The cashier at the grocery store or the buss driver...  to be seen for who you are, how hard can it be? "