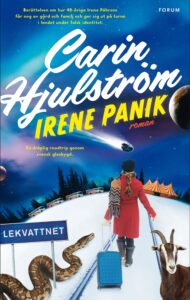 Irene Pährson is 48 years old, loves cupcakes and lives on the countryside with her husband Björn, three teenage children, horses, dogs, cats and an extremely dissatisfied goat. As a young woman, Irene wanted to become a singer or librarian, but nothing turned out as she had imagined. Now she has been home and taken care of the family and the worn farm while her husband has built up the company Björn’s Bath in Ulricehamn. Björn usually calls his wife Irene “Pure Panic” because she constantly takes it upon herself to save everything and everyone in the most chaotic situations. Irene longs to broaden her horizons and build her own identity outside the home. A number of strange coincidences suddenly give her the strength and courage to resign as the family's project manager and embark on an adventurous journey. When she reveals her plan, Björn tells that he has met a new woman – Ulla through work. During a wonderfully crazy road trip through a wintry sparsely populated Sweden, Irene gets to know a number of odd people that will mean a lot to her and she to them. All this while a meteorite from outer space is approaching the earth at an incomprehensible speed. And in the end, Irene really gets used to her ability to deal with both chaos and panic… Irene “Pure” Panic  is a humorous and thought-provoking story about taking charge of her life and daring to reformulate her dreams.

"A humorous and entertaining page turner!"

"Clever and generous, written with a light hand and with a twinkle in the eye."

"A fun and warm-hearted story ... Confidence in people's ingenuity and the positive rural romance make this a warm-hearted and entertaining feelgood novel that makes you feel good."

"Carin Hjulström writes mood-boosting about following her dream and feeds on flawless observations along the journey. You have to like Irene Panic!"

"A hilarious story about Irene's road trip through Sweden where she meets many special and odd people. Both Irene and the people she meets are very happy with each other! A fun book for the hammock!"

"Carin Hjulström really takes the turns in this autumn's novel and with that honor. With a high tempo and lots of drastic humor, she portrays the Swedish countryside and its inhabitants in a way that they are guaranteed to never have been portrayed before. On the basis of depopulation, stubbornness and enterprising, she puts a number of screws and dripping situations in. It is fun, entertaining and easy to digest, not so reminiscent of The centenarian who stepped out the window and disappeared and at the same time has a - admittedly well embedded, but still - streak of seriousness at the bottom ‘That you have to value yourself, otherwise no one else will either. That you should not allow yourself to be a rag rug.’"

"THERE ARE MANY LAUGHS when Irene meets a Russian fixer with most things in stock for black payment, a Thai masseuse without customers, a Pakistani sausage seller, an attic office gay (not a wardrobe gay), a Greek economist, a worn-out senior care manager. And so on. in between, Carin Hjulström actually manages to get some relevant social criticism. "