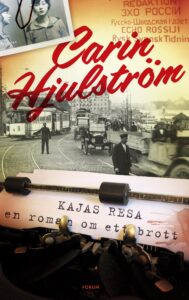 The doorbell rings at the home of freelance journalist Helena Åkerström and a courier delivers a box from an anonymous sender. The box is filled with old newspaper articles, photos, court documents and diaries. At the top is an unsigned letter. The sender explains that she is seriously ill and appeals to Helena to go through the material as a journalist and see if she can do any of it. It is about the most brutal political murders that took place in Sweden in modern times - a group of tsarist Russians who in 1919 tortured and murdered several Bolsheviks in exile and sunk them in a lake north of Stockholm.

Through the letter, Helena also learns that she is not the family's first journalist. It was Kaja Asklund, in the 1910s a well-known signature in Stockholm’s Magazine According to the anonymous letter writer, Kaja was well acquainted with the story of the crimes of the Tsarist Russians and she knew several of the perpetrators.

Helena is skeptical at first, but becomes more and more fascinated the more she reads. When she also learns that Kaja disappeared without a trace in September 1919, her interest naturally increases. Helena starts taking notes and writing. She does extensive research and very soon the story and its main characters are brought to life in her text.

The novel Kaja's Journey is based on a true story and depicts both the crimes and how the journalist Kaja was accidentally involved in the Russian League's cold-blooded activities in interwar Stockholm.

“Carin Hjulström has written a novel which, with its mixture of facts and fiction, becomes a deep dive into a dramatic time in Sweden - not to mention the world. ... There is a sympathetic joy of discovery in this book, embodied by Helena, which does not give up until she has received answers to most of the many questions she is faced with. She learns things all the time and, like the reader, is driven by curiosity in much more than just the crime mystery.”

“I am delighted that Carin Hjulström is tightening the bow and daring more than just being petty. Here is a historical novel, based on real events and with strong women in the lead roles. ... the end must be just like life, that is, both tear-jerking, surprising and with a wonderful grunt. ”

"In the light of the Pussy Riot trial, the book became extra interesting, because Carin Hjulström tells so well about Russia's history. Every now and then, her novel about relationships, writing women and the Russian revolution is linked. ... I like the content of the book and learned a lot. ”

“The framework document will be a parallel document, where the contemporary journalist and Kaja's relationship with their respective spouses is a representation of how female creation is hindered by self-absorbed, envious men. ... The picture of history makes the novel worth reading. ”

“Carin Hjulström has written an ambitious novel about the Russian League, an anti-communist organization that was formed in 1918 in Stockholm with the aim of fighting the "red danger". ... The story is interesting and Carin writes passionately and with enthusiasm. ”