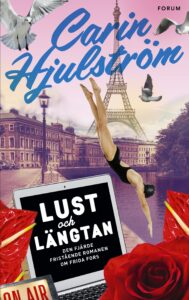 "Sex, power, money, drugs ... these are the topics listeners want!" Frida Fors gets a new Swedish-American producer who directly has the management's ear. Frida's evening program "Late conversations in P4" must be sexier to develop and attract new listeners. Kroken is the government's investigation into the Swedish people's sex habits from a public health aspect. Suddenly, Frida will talk relaxed on the radio about the listeners' experiences of sex, cohabitation and love.

She hesitates, but at the same time does not want to be a backwards aspirant. The producer, Rosetta, has recently moved to the city and immediately wants to become Frida's best friend. Rosetta has heard that there is a man in Gothenburg with extraordinary sexual characteristics that drives women crazy with desire and she entices Frida into the city's nightlife.

The townhouse in Kålltorp still echoes empty. The children are out and about and Frida's flirtation with the doctor Martin across the street does not turn out to be what she dreamed of. So when the authorities appeal to people who have unused living space to take their responsibility and rent out a room, Frida shows up. She advertises, gets lots of answers and chooses a female student from the Central African Republic: lawyer, interested in literature and perfect as a resident. But when Michell, 34, shows up, it's a man. It will be a long autumn.

"Her new chick lit novel is pure Love Actually. Do you remember the charming British romantic comedy where it rained love couple? Carin Hjulström sprinkles in the same way with parallel tracks with supporting characters ... What makes Love sought for such a nice reading armchair buddy is both the fluent language and the fun plot. As a reader following Frida is like sitting safely and unseen next to a single friend at the dating computer: completely irresistible, even if you have to be careful not to become cynical about the coup ... If Carin Hjulström continues like this If Martina Haag can safely retire, then Sweden's new chick lit queen will live in Gothenburg. "

"Beautiful and clear-sighted about loneliness, and about how difficult it is to find a new love."

"Adorable and fun. I laugh out loud. To a few pages later pick out the pillow of shame when the descriptions of the adult dates become too embarrassing. But most of all I am impressed by Carin Hjulström's ability to mix light touch with just the right amount of seriousness." (Score 4 out of 5)

"Easy to read and fun but also emotional."

"As usual when it comes to Carin Hjulström, the story is fluently told, easy to read and has drive."

"After twenty years, Frida Fors is now returning as a middle-aged woman in the search for love ... Her career has finally taken off, the uncertainty and anxiety that the reader recognizes from Not on the Map (2009) and Finding Lost (2010) has been replaced by a permanent job as an experienced radio presenter with out-of-town children and terraced houses with a blanket. Like so many others, she has ventured into the dating jungle on the internet, which turns out to be more difficult than she imagined. with the author's well-known accuracy around everyday details. "