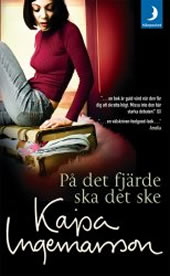 Paula is a young woman in her thirties who has just returned to Stockholm after an extended period of travelling, searching for adventure. Once back home, it doesn't take long before she begins to feel restless, at the same time as a sense of being lost begins to overcome her. What does she really want to do with her life? Paula suddenly finds herself out of step with her best friends, Anna and Rakel, who are busy making plans about babies and their careers, and she has also begun to question her feelings for her boyfriend of many years, Johan.

Right at the moment when Paula feels the deepest sense of dejection, she receives an unexpected offer to audition for a part in a movie. She realizes that she is facing a decisive moment. What if she doesn't get the part, or, even more frightening, what if she actually does...

On the Count of Four is a novel that many young women can identify with. Kajsa Ingemarsson balances skilfully between rough humour, great seriousness and clear psychological insight. This is her debut novel.

"Previously, Kajsa Ingemarsson has made a name for herself as a funny lady on both radio and TV. This is her debut novel, and it's a gifted one."

"This is truly good, stimulating light literature that Kajsa Ingemarsson has written."

"... it's mostly an entertaining depiction of our times, occasionally ironic and sarcastic but just as often funny and good spirited."

"On the Count of Four is a book about courage, about daring to try and daring to hope, and once you've made up your mind you don't need a lot of encouragement to take the step."

"It's easy to identify with On the Count of Four and there's never anything wrong with a novel that makes you laugh and smile at yourself."