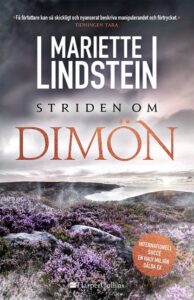 Julia Frisk has made herself a promise never to see the former cult leader Franz Oswald, who resides on Fog Island, ever again. Yet, through an unfortunate coincidence Julia and Franz now have a common enemy. A religious brotherhood that call themselves the Genesis Evangelicals. They have a nightmarish view of women and use orthodox and cruel upbringing methods on their daughters.

Julia becomes obsessed with writing about the brotherhood, and when she begins to do research, she opens a snake pit of secrets, betrayal and evil. It does not take long before she becomes their target. The only one who can help her is someone who knows how they think and act, someone who is as ruthless as they are. She only knows one person like that, but does she dare risk being drawn into Franz Oswald's spider web yet again?

"Mariette Lindstein's books about the cult on Fog Island, and also life after the cult, is a series that is impossible to put down. In the latest book, The Battle of Fog Island, a new threat shows up that forces enemies to work together. But the most interesting is the cult leader, Franz Oswald's development. His personality changes began in the last book, Requiem on Fog Island, and continue in this one. It is just as entertaining for the reader as it is horrifying for the man who starts feeling empathy." -Tara magazine, one of the editorials five favorites for the year.

"Mariette Lindstein’s writing style is both knowledgeable and captivating...
Her own experiences from life within a cult give the books another dimension. It becomes believable, spooky and creepy." - Bohuslänningen, magazine