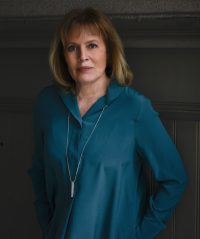 Mariette Lindstein (born 1958) was raised in Halmstad on the west coast of Sweden.

From a young age she had a knack for telling stories, ghost stories first then short novels that were published in teen magazines. By the time she graduated high school she had her sights set on a career in journalism.

These dreams evaporated when she was drawn to the Church of Scientology at age 19. She was rapidly promoted to the cult’s headquarters outside Los Angeles where she wound up staying for more than 20 years and worked at the highest levels, directly under Scientology leader David Miscavige.

She managed to escape 2004 under dramatic circumstances. Conditions at the Southern California compound became so disgraceful that the staff were virtual prisoners behind an iron fence topped with razor wire and patrolled by guards.

Mariette currently lives in Sweden together with her husband Dan who has also left the church of Scientology. She works as an author and lecturer full-time.  She has dedicated her life to enlightening others about the problems with cults.

It was American writer and Pulitzer Prize winner Lawrence Wright who convinced Mariette to speak out about the abuses she experienced in Scientology. At the time Wright was working on a non-fiction book (Going Clear: Scientology, Hollywood & the Prison of Belief) about Scientology and while interviewing Mariette the idea of writing a suspense novel in a cult setting was born. Mariette envisioned a book that would reach a broad audience and not only entertain but enlighten people about the dangers of cults, something inspired by her own experiences. First of foremost, though, Mariette wanted to write a really good thriller.

In 2013, Mariette quit her job as a pre-school teacher and devoted her energies to writing, speaking out and enlightening others about cults. She has done interviews with many morning and evening newspapers in Sweden, including Dagens Nyheter and Aftonbladet Sunday, as well as magazines such as a Filter, The Home Journal and Femina. She has also appeared on television shows “Malou after 10,” “TV4 Morning News” and was featured in the recent Swedish Television series about cults in Sweden, “The Only True Way.”

Her debut novel Fog Island is inspired by her own experiences and was released in September 2015. It has won critical acclaim from the likes of Sweden´s best- known critic of suspense literature (Lotta Olsson, Dagens Nyheter), who called it “enthralling as the most suspenseful thriller.” Critic Jonas Danielsson in the TV-program “Go’kväll” (Good Evening) said the book is, “A page turner, the most interesting novel this fall.” The book has been on the top list of Adlibris, Sweden’s largest Internet bookstore, for several months. Fog Island is first and foremost a suspense novel, but with the ulterior purpose of warning about the dangers of sects. Fog Island became a trilogy and then an additional four books have been written about Fog Island as a continuation of the series.

"One of our most deeply penetrating authors psychologically."