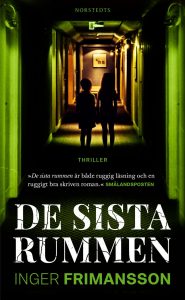 A woman wakes up in a large and strange house. The first things on her mind are the children! Where are the children? They are so small, only four and six years old. Why are they not here with her? And how did she get to this peculiar and scary place?

The bed she slept in looks as if someone else has shared it with her, but who? And where is her handbag? She likes it, the black straps have the exact right length. She would be able to give a good description of it to the police, since that is where she should go now.

Inger Frimansson is the master of the psychological thriller.

Here, she takes her psychological thriller a step closer to the horror novel. With great and vivid realisation, she also paints a portrait of woman’s life that is a complete story in itself. A master at work, serving up a skilful, creepy stretch-read!

”The tension that is built up and that staggers is totally in line with the wizards of Alfred Hitschkock’s hallmark which Inger Frimansson masters perfectly, feeding both the reader’s and protagonist’s increasing concerns and fears… a skilfully told and raging story that never lets go of the reader. It holds you with a firm iron grip all through the pages contained between the binders, and before the story ends you are relieved that the binder is there for you to hold on to.”
-      Tomas Melander, Svenska Deckarfestivalen

"Without revealing too much this novel would make a terrifying horror movie. Frimansson writes on the edge of realism and fantasy. No, not fantasy, more like known fear, as in fear of dying... The Last Rooms is both a terrifically written novel as well as a terrific read. As usual when it comes to Frimansson one should add." - Bengt Eriksson, Borås Tidning

"The Claustrophobia, the horror that slowly creeps in and increases in strength and intensity... One of the true highlights from this years books." - Crister Enander

“The beginning is brilliant. A woman who wakes up in a unfamiliar room. She forgot her own name but knows that she has a husband and two children, whom needs her. But how will she get to them when the phones doesn’t work and all the doors to the building are locked.

The Last Rooms is a horrifying psychological thriller. Inger Frimansson skillfully depicts a masterful and bizarre parallel world where the contrast to everyday life and the woman’s terrifying events inside this strange house is what makes it so frightening… You really want to read until the end.” - BTJ

"It is exciting to follow Viol though a series of bizarre events and meetings, where a whole bunch of traditional myth and legendary things will be useful. For example there is a dog-like creature that brings your thoughts to Kerberos, the guard of Hades and there is also a small robins bird that leaves a leaf on the pillow where someone used to sleep whom has now in a mysterious way  been released from the hotell just as the legend says." - Christian Swalander, Alba.nu