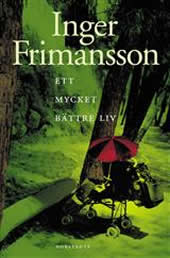 A Day Care center in Hässelby is preparting its twenty-year anniversary party, and the caregivers and children are out picking spring flowers on a sunny, oak-covered hill, while four-year-old Angelica sleeps in her stroller a few yards away. It seems like a spring idyll, but when the caregivers return, Angelica has disappeared without a trace, with just an empty stroller left behind. Actually, a certain man has kidnapped Angelica on behalf of the woman he loves, Janna, who is starting a cult-like sect in far-flung Norrland Province. Janna has good intentions. She’s worried about the environment and she is hoping that a new generation, growing up far from the pollution of the city, will have a much better life. The problem is, her own children are only boys, so she must find another way to add some girls. In A Much Better Life, we follow the events through the eyes of three people: four-year-old Angelica, Magda, the caregiver who’d been in charge of her when she was kidnapped, and Daniel, just one of many men so attracted to Janna that he’s willing to commit crimes for her sake.

“A powerful book. Right in the middle of an idyllic spring day, the threat arises, and, like very few others, Inger Frimansson can make the story leap off the page.”

“This is her best thriller yet, and can be compared to the international stars.”