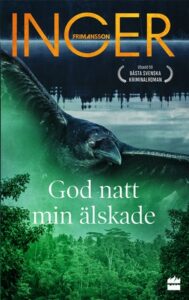 Who is Justine Dalvik, the woman in the stone mansion high over Lake Mälar? She refuses to sell her house and seems to live an independent life with her great fortune. What happened really during that tragic trip she took to the Malaysian jungle? When Justine is around, frightening events begin to happen. Maybe the clue lies in her childhood when her showdown with her past becomes catastrophic.

The book won gold in the american Book of the Year Awards 2007 (ForeWord Magazine), in the category translated novels.

“Having just a few books under her belt, Inger Frimansson has carved out a position among the best Swedish depicters of the wayward ways of the human soul’s deepest subconscious.”

“With this book, she stands out as one of the greatest creators of psychological tension in contemporary Swedish literature.”

“With absolute pitch for the abnormal lying beneath the apparently normal.”

“Inger Frimansson bears out her ability to give emotions, life and believability to the invisible oppressed, the ones who can suddenly strike back – with life-threatening consequences. Thrilling is just the beginning.”