The Man in the Wall (Mannen mellan väggarna) 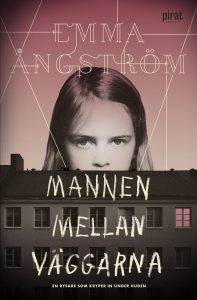 Alva moves with her mother and two older sisters from the villa to an apartment building in town. She has a bad feeling about the whole thing. Her new room is small and the two sisters continue like they always have, they don’t include Alva in their playing, but she is used to be alone. She misses her father, but he is not someone she should mention at all. He is locked up in prison.

Shortly after they moved in a murder takes place in the house, it is one of the strangest murders in history. A woman who had disappeared from her home was found dead two weeks later by her husband in the hall of their shared apartment. Everyone is baffled. Where had the body been hidden for two weeks? And how could the perpetrator get in and out of the apartment?

Alva’s feeling about the house was right, more bad things start happening. The little lady next-doors finds her dog lying dead in the street, food disappears from the refrigerators and an unbearable smell spreads in the apartments. Alva is inspired by her late grandmother who had a flirtation with the occult, when she decides to try playing “Ghost in the glass”. It doesn’t take long until there is a sudden knocking in the wall. And Alva thinks that this new home might not be so bad after all.

The Man in the Wall is a both thrilling and stylish thriller.

"An easy to read well-written thriller with an emphasis on psychological horror rather than violence and blood ... The story is original, and it is also unusual how she managed to present the sinister and scary in the book in a multifaceted way."

"Being an architect Ångström know that in most houses there are aisles, drums, air pockets between the walls, large enough to accommodate a human. Based on that experience, she has built her chilling thriller in an apartment building in Stockholm. "

"One of those book that scares the hell out of all of us who live in apartment buildings, where it is believed to be safe when you lock your own door ... Emma Ångström elegantly builds her story about the newly arrived girl Alva."

"Right from the beginning the book becomes very compelling. ... It is an exciting novel that captivates the reader constantly much because the story is different from many other detective stories. "

"Hu! This well-written thriller makes me remember childhood’s scary stories ... The resolution is terrible, and the police involvement non-existent. "

"A very well-written and entertaining thriller about finding awful things inside the walls of an ordinary apartment building ... I love the stories of everyday madness and how it beneath the surface bubbles of nasty things."

"Ångström has really aimed right to create the character’s descriptions. The different persons are so vivid and real, so you think you know them personally. The language is simple, but striking. The story is also told the right way, piece by piece the truths are revealed ... The book skilfully builds a net, suddenly you realize that the story has caught you. I can definitely see myself read it again. And again."

"The fascination of secret rooms and the supernatural shines through the story. The style is easy to read and the story is driven. "

"A brilliant story that is both exciting and creepy. A house of secrets, which is not at all what you think at first sight ... If you like thrilling stories, this is a book for you to read. "

"The author succeeds in creating an atmosphere that gives goose bumps, which are reminiscent of Ira Levin's classic" Rosemary's Baby "... The language is airy and exceptionally easy to read. The sentences are simple and it is always enjoyable to read text that is so well worked that my inner proof-reader has the opportunity to take a vacation ... In summary, "The Man in the Wall"; an suggestive and well written thriller debut, by an author who we surely will see more of in the future. "

"The feeling of being watched causes shivers, and it is easy to think that you probably read this book in daylight. Ångström is also very skilled with regard to create characters ... she offers really high suspense and simultaneously also something that differs from all other crime-novels "

"Ångström cleverly portrays how Alva's sense of alienation slides over to hatred of the people in her environment."

"It's a madly exciting and intense book! ... It is impossible to put down, creating a sense of unease which is hard to get rid of. "

"The setup is classic. The fear of finding something behind the wall you didn’t expect is always thrilling. The threat of inexplicable powers scares most people. Emma Ångström leads the reader skilfully through the terrifying hints and presentiments. She portrays the house's inhabitants well and presents a credible story. "

"A brilliant horror novel, with strong characters and fine sense for sadness and alienation."

"Engages from the first page ... Ångström’s style is assertive and direct ... Highest Rating for this well-crafted stretch reading shocker! "

"A creeping unpleasant story that includes murder and incantations, but also loneliness. ... It is well written and insightful. Credible both in the description of the precocious Alva and the lightly autistic W. As a spice, she has also added an element of the supernatural. Or not? The reader chooses. "

"If I had known nothing about this book I would read it just because of the cover, there was just something about the little girl who intrigued me and oh boy she certainly doesn’t disappoint in the story.
If there was ever a child that needed loving it was Alva, she was like a square peg in a round hole trying to fit into her family. Well the family she was left with anyway, her mum and two older sisters. She didn’t even look like them and none of them seemed to miss her daddy like she did and it was all mum’s fault! She much preferred her own company to theirs and would spend hours on her own, where she would hear noises and longed for it to be her dead grandma trying to make contact. She would do anything too to make it happen.
To say she is weird would be understating the facts. She had some rather unusual games that she played with friends, that only ever came over to her house once. Alva is a feisty little girl who finds a playmate that is in need of a friend and soul mate just as much as she is. Someone else that no one really sees.
This has to be one of the most bizarre relationships that I have come across, terrifying and tender at the same time. An incredible story, that planted some pretty twisted thoughts in my mind that came back to haunt me after I finished reading. Those ones my own imagination continued to develop especially in the night when my own house found its voice.
It is such a dark and disturbing story which I read with my jaw permanently dropped. I mean how far would author Emma Ångström take this, well lets say I needed a drool bib because I am still on a high! A brilliant book, just awesome!" - Susan, on Good Reads