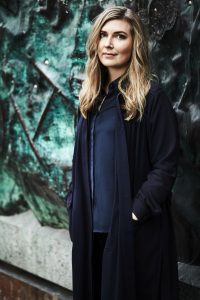 Emma Ångström is an author, journalist, song writer, lighting designer and architect. She made her debut in 2009 with the novel AND ALL IS DISTORTED (Och allt är förvridet) . She has a Master’s degree in architecture from the Royal Technical University in Stockholm and from Parsons in New York. Besides her writing she currently works as head of communications for an architectural firm in Stockholm.

For the debut Emma Ångström was nominated for the Nöjesguiden Stockholm Award for the best read in 2009. The motivation read:
"Emma Ångström’s debut attracted the attention because of the protagonist's twittering, but the novel's genius is not found primarily in the marketing or micro-blogging, but in the language. As readers, we came so close to the characters that we had no chance to defend ourselves against the abyss that waited at the end. This is the beginning of a wonderful authorship. "

In an interview in Scan Magazine Åström was asked what she wants to do with her authorship and she replied: "I'm not interested in writing books for the reader to figure out who the murderer is. I want to explore human motivations, write exciting, driven stories that also reveal something more, about relationships, vulnerability, loneliness, shifts in power, societal structures and grief - difficult things that can be made more easily accessible and possible to explore through literature".  Later on in the interview she commented on the fact that another newspaper had recently crowned her " the new detective noir queen" with saying that she found it "a bit odd, seeing as I don't write detective noir" she teased "But I don't really care much about prestige in that way. My goal has always been to be able to keep up the writing. As long as I can do that, I'm happy".

In 2016 THE MAN IN THE WALL was released, a remarkable and nerve wracking thriller with a ”monster” it is hard not to feel certain sympathy with. And a little girl that finds her own wonderland together with someone she can’t present to the rest of the family.

In 2019 A WONDERFUL DEATH was released. A psychological suspense about how well you really know the person you married. Ångström continues on the path of writing thrillers and in 2021 she released the novel TO THE DEAD ONES that treats subjects like sorrow, womanhood and mental illness. All wrapped in a horrifying story set in what appears to be a haunted house.

The writing of Emma Ångström resembles of Marie Hermansson and Caroline Eriksson. Tightly constructed writing shaping characters of real flesh and blood, brushwork of a steady hand that forms each piece of the portrait with stylistic assurance.

2016: The Man in the Wall (Mannen mellan väggarna), horror