The Shadow in the Water (Skuggan i vattnet) 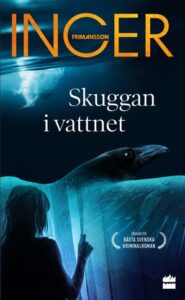 Justine Dalvik murdered a number of her demons, but managed to escape being caught for her crimes. Six years have gone since then, and her life has calmed down considerably now that the risk of being discovered has diminished. Yet the past is threatening to overtake her – in her nightmares Justine sees Berit’s body float up from Lake Mälar’s depths. At the same time, friends and relatives of the murdered woman are undertaking an investigation of their own, and a young, stubborn policeman is trying to make a name for himself by solving cold cases – they all begin to hover around the old stone mansion where Justine lives with her pet bird.  More and more, Justine starts to feel the noose tightening around her neck.

"In spare prose, Frimansson skillfully weaves themes of darkness and light, guilt and innocence, life and death. Not for the faint of heart, this bleak mystery will linger in readers’ minds long after the last page is turned."

" Without gore, without, as Stephen King once wrote, 'going for the gross-out'. Frimansson is able to turn up the tension slowly and steadily until, at the finish, the reader is left breathless and tight-chested, with nary a car-chase or disemboweling to be seen. Not a bad trick. The Shadow in the Water won the 2005 'Best Swedish Crime Novel of the Year' bestowed by the Swedish Academy of Crime Writers. Pleasure Boat Studio (the publishing house) has done mystery lovers of all stripes a service in bringing it to the United States."

“Frimansson is one of the greatest creators of psychological tension in contemporary Swedish literature.”

“Inger Frimansson shines when describing the feelings of frustration, fear and anxiety which surround these people, whose lives are inevitably intertwined…I read it straight through and was totally immersed in the various fates which have been so insightfully and wonderfully drawn by Inger Frimansson./.../I shudder when considering the fateful environment in Hässelby: a well-off suburban area suddenly becomes a veritable every-day nightmare and the waters of Lake Mälar are threateningly dark.”

“Why has no one done a film or TV series from these books? I have to wonder every time I meet these normal, real, completely insane people in their inner and outer dialogues, which are light years ahead of any other ‘Mystery Queen’s’.”

“We recognize the way the story is laid out, the tension grows and the game is played, but in this book we also have an end game. Frimansson takes up her “cold case” and blows new life into it, without repeating herself and without using old tricks. Expertly done, and that’s the strength in Inger Frimansson’s art, finding the space between the constructed plot and the open and clear tale.”

“Frimansson shows that she doesn’t need a great deal of action to create that dreadful, frightening, tense and anxious feeling. At her best – and worst, as far as your nerves are concerned! – she takes her time to slow down and tighten the screws; the knife plunges ever deeper into the human psyche. Readers hold their breath while anticipating the inescapable end.”