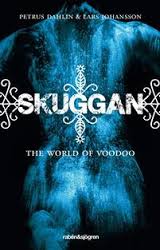 When two computer playing teenagers from Stockholm meet Shadow, a teenage girl on the run from a thousand year old West African conflict, an unexpectedly and strong friendship arises. The three teenagers are total opposites, but very rapidly their friendship grows so strong that they are willing to do anything to help each other. Regardless of the price.

Ruben is bullied at school and thinks the days before summer break can’t go fast enough for him to escape his tormentors. He meets Miranda, who belongs to the same clan in the computer game "Dead and Dreaming". In an incident of instant courage, they decide to meet in real life. Miranda is everything that Ruben is not, privileged, aware and full of self confident. At least, that's what Ruben sees. The fact that Miranda actually suffers from tremendous need for control and that she does not at all feel lucky, no one knows.

Shadow, the rightful heiress to her clan's top position, has come to Stockholm on the run from a rival clan's sorcerer and his helper. The two clans fight each other with spiritual powers and voodoo and the persecutors have only one goal, to destroy Shadow.

Ruben and Miranda decide to help Shadow and find themselves in the middle of the millennial conflict. But Shadow also wants to help Ruben and Miranda. Together, they become strong. Especially with the help of the forces Shadow has and her knowledge of voodoo. They open the door to the world of voodoo, they experiment with magic – and they must take the consequences. Major consequences. There is no turning back.

Shadow is a book about revenge, love and voodoo. And about a friendship so strong that you are willing to save something bigger than yourself.

"The language flows easily and smoothly, the dialogue seems credible . It is not far from the highlights on the voltage curve, there is action and some pretty brutal scenes of violence (which makes the book not suitable for the youngest readers). Shadow has many qualities, and it fits for boys and girls from secondary school and up who enjoy books with speed, excitement and a dose of friendship and love."

"Shadow is a broad novel. It is well written and exciting and it takes off from a number of exiting positions. The handicraft carries the hallmark of the international success."

"The two Swedish authors Dahlin and Johansson have written a YA novel in the same class as another international success, The Hunger Games."

"Shadow is really exciting. It is an ambitious effort with an impressive plot."

"A Swedish young adult book on voodoo doesn’t come often, but since it is well written and exciting it is even more welcome. I stretch read the 425 pages and am happy that the end point to a sequel."

"For all of you who like creeping tension, exotic elements of magic, voodoo and budding love, here comes a real stretch reading book. This will be one of this fall’s most widely read books!"

"The characters are skillfully and effectively portrayed, the language is easy to read and it's a story that stays in your mind even if you manage to pull yourself from the actual physical text. Shadow is a well-written young adult book dealing with the danger of revenge. All this makes Shadow a page-turner and very hard to put down."

"A book I highly recommend."

"This will be the book everyone is talking about and wants to read!"