Always with You (Alltid hos dig) 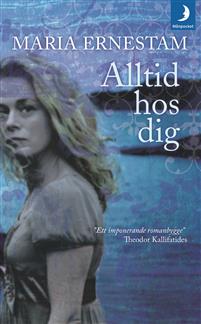 Suddenly nothing is the same. Inga’s husband has a heart attack – and dies.

For two years she pushes her grief aside, doesn’t show her sorrow to anyone and buries herself in work. But a mean comment makes the ground open under her feet. She flees to her family’s summer house on the island of Marstrand, to get the peace and quiet she needs to find a way back to life.

By mere accident she finds an old box. It is full of papers, newspaper clips and at the bottom there is a letter, postmarked in Mombasa, Kenya 1916. This attracts Inga’s attention, especially by some cryptic lines at the end of the letter.

With an eagerness she has not experienced for a long time, she begins her search. To get an explanation to the letter and to get away from her own presence. Her investigation leads her back into her family history, to an event in the shadow of World War I. And she understands that another woman’s fate has had more effect on her own life than she could ever have imagined.

"With a bittersweet style Maria Ernestam describes how, throughout all ages, the only thing that will help us survive a loss is the reconciliation with ourselves.  And through a series of anecdotes, drawn with a pencil, just as black and white photographs capture in the blink of an eye, she delivers an shooting star of eternal hope."

"A striking story, from the beginning om the century to the millenials, treating origin and family"

" A passionate and striking novel. A fantastic story from page one. An absolute favorite!"

"Ernestam is a driven story teller. In this novel she works with three different time settings: 1959 the dying Rakel remembers her youth 1915-1916. In present time Rakel’s granddaughter Inga investigates her family’s secrets to get through her own grief and sorrow after her dead husband and after the loss of her father who since long was lost in his own silence.

The portrayal of the class society in Gothenburg during the First World War is vivid with the odors and the lice, the crystal and the damask – almost in Fogelsström-class. The maids Rakel’s and Lea’s secret is finally discovered by Inga. Her grandmother gives her back her stamina and energy."

Maria Ernestam uses a nuanced language with which she shapes the characters in her story, reads their experiences and feelings. She creates time prints form 1916, by adding details and sometimes using a language resembling the one from early 20th century. With a gentle hand Maria Ernestam also weaves pacifistic and feministic ideas into the text, without forcing them onto the reader.”

”Ernestam is a master at urban legends and she uses a slightly burlesque language. And who says the urban legend, as well as the myth, does not include more than what is seen? In Always with You we also find an existential dimension, where tall shadows reach into all that we have got, the present. Maybe there is also a possible reconciliation to be found.”

”The reader is fatefully drawn into the story.”

”Right now the best! /…/Maria Ernestam manages to light-handed tell a story which easily alters between different times and characters. /.../ The present and the past are woven together to a story more thrilling than the bloodiest crime novel. It is about love and reconciliation with the pain that shapes us to who we are.”

"Ernestam writes with intelligence and with a large dose of humor about the difficult issues of life. The language is beautiful and the characters are very well carved out. The style is recognized from Ernestams earlier books and it is a true pleasure to follow Inga in her search for the truth about her family destiny.”

”A well composed novel which truly wakes the appetite for reading!”

"Maria Ernestam has a brilliant black, absurd humor in her books.”

"Maria Ernestam’s books, especiallay Caipirinha With Death and Buster’s Ears, are usually like a twisted maze for your brain – a trip up and down, back and forth. Her new book Always With You has none of that. It is rather a middle speed road which every now and then goes off into an old forest. The rich Ernestamian language is the same, but now one of Sweden’s most skilled authors tell a very well researched family history. In a nice tempo and very graceful.”

“This is a wonderful novel… a novel about our memories and the power our own memories have on us and the people around us… she manages to hold you in a grip when you read, it is almost scary… it only takes a sentence, that is how good she is, she writes a sentence, she hints about something, and all of a sudden are hit with a punch in your stomach or a knife in your heart and you find yourself on a different level…”

“Extremely wonderful reading experience… I can draw parallels to Anna, Hanna and Johanna … a very pleasant trip back in time…”