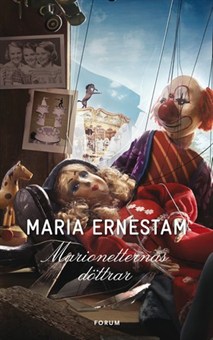 On a warm summer day in the early 1980’s the eleven year-old Mariana makes a horrific discovery . She finds her father dead on the family’s carousel. Shot and bound to one of the carousel horses he revolves round and round, an image that Mariana has been forced to live with ever since.
Over thirty years later Mariana is still living in the same small town on the west coast. She is the owner of a shop selling antique toys, passed down through her family since her grandparent’s ran it. Her husband and daughter are abroad, and Mariana finds an opportunity to reflect on what she wants with her life. As always, she has a great support of her two sisters who both live nearby.

Everything changes the day the American Amnon Goldstein moves into the town to renovate the old bakery. Amnon, charismatic and secretive, explains that his father once lived in the town as a young Jewish refugee and he wants to write a book about the place that gave his father a home. Gathering material for the book he seeks out one inhabitant after the other, chatting with them, asking questions and getting some of them to open up. Defenceless, they tell him about their lives, their secrets and their desires, and in the wake of their confessions things start to happen.

While some are enchanted by Amnon others are not. The situation is not improved when inexplicable things start occurring. In their search to find out who Amnon really is, and what he really wants, Mariana and her sisters are also forced to confront the old tragedy, the murder of their father,that was never resolved.

"Daughters of the Marionettes evokes deep emotions. You will not be able to forget it, especially since it is based on a true story. 5/6."

"I am in love with this book and I wish Maria Ernestam great success. You can only write such a moving story once in a lifetime. 10/10 points."

"Maria Ernestam is a skilled author with a capacity to dramatize and capture her readers. She proves this again in her sixth novel, Daughters of the Marionettes, a story about an unsolved murder committed thirty years ago in a small town on the Swedish west coast. Maria Ernestam aspires for more and seeks to explore the reasons behind violence and what causes people to act the way they do. She writes about love and jealousy, about friendship and deceit…"

"The novel is mystic, almost like a psychological thriller while at the same time it can almost be called a fairytale."

"She is mysterious, headstrong and she possesses a wonderful realm of fantasy beyond the usual. The Marionettes Daughters has a tightly interwoven dramaturgy in wich Maria Ernestam manages to weave in most of our human and bare emotions in the different characters."

"Maria Ernestam’s latest novel is just as suspenseful and well written like her former novels."

"Unexpected twists and sharp humor - one of Sweden's best word magicians is back with the novel "The Daughters of the Marionettes." And as always when Maria Ernestam holds the pen, it becomes a sweet language - magic at the highest level."

"This is more of a fairy tale than a crime novel. Maria Ernestam has written a novel that in itself is a complete little world, suiting well to listen to (as audiobook) when the darkness in October falls."

"Wonderful willfullness. Daughters of the Marionettes is an unusual novel that already at the first line takes the reader by storm. In Ernestam's wayward world, she shows how childish and irrational people can behave - it makes the characters unbelivably credible. Therein lies the secret of why this is a real grand slam. It's very, very lovely!"