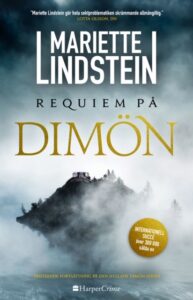 Two years have passed since the charismatic leader Franz Oswald sacrificed his own son to save a young woman, Julia Frisk, which caused him to suffer a stroke. The recovery has been slow and painful but now he is back and more determined than ever before. If only it wasn’t for the unwanted emotions he is suffering from...

Julia is working as an editorial assistant at a fashion magazine and is looking to move up. Then her big chance shows up. The magazine wants an interview with Franz Oswald – and he refuses to do it with anyone else than Julia.

Everyone tells her not do go through with the interview and see Franz. But once he mentions his plans to return to Fog island and arrange an experiment that he calls “Requiem” her curiosity gets in the way. And as per usual when Franz Oswald is involved everything spins out of control...

REQUIEM ON FOG ISLAND  treats the reactions within a group of people who go through isolation while also being put under extreme stress. It’s a book based on the authors own experiences in a cult.