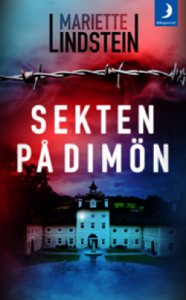 Nominated for the CWA Dagger Awards in 2019

NO 1 Bestselling book on Audible Germany

THE DEADLIEST TRAP IS THE ONE YOU DON’T SEE

Sofia Bauman has just taken her university exam and ended a troublesome relationship with a boyfriend when she attends a lecture about a New Age movement called ViaTerra. She feels an instant attraction to the spiritual components and to the leader Franz Oswald, who is young, good-looking, urbane, and mesmerizing. His message is that stress, poisons in our food and a world out of balance are wrecking humanity. The movement has its headquarters on an island off the Swedish west coast.

Sofia is offered a job there and stays. But when summer gives way to the dense fog that engulfs the island she begins to wonder if she has been pulled into a cult. Oswald rules with an iron fist, an electrical fence has been raised around the property and there are surveillance cameras everywhere. The road back to a normal life for Sofia slowly turns into a nightmare. For no one has ever left ViaTerra.

”Over 500 pages are completely devoured. Both the jury and the many readers who voted were unanimous – the book is impossible to put down. The language is unpretentious. The feeling of a documentary novel makes it stick out on the overcrowded crime novel shelves. The author writes about a secluded world in a way that is extremely believable and fascinating. A suspense novel about what makes people go through hell and high water because of the desire to belong. This is the first in a new fiction trilogy – we really look forward to the continuation.”

”Fog Island is toplisted as one of the Best recent crime and thrillers 2019” – The Guardian, UK

Fog Island is one of the picks for Best books to read 2020 by Woman & Home, Brittish Magazine

"The Scientology movement has become fiction through Mariette Lindstein´s thrilling novel: Fog Island . The day-to-day routines of a cult are evidently in need of the novel formula, the non-fiction descriptions I´ve read are not nearly as compelling as this professionally constructed thriller. Compulsory nailbiting guaranteed."

”A page-turner, this falls most interesting novel.”

”Suspenseful as the most riveting thriller.”

“It is fascinating to get a glimpse at how one can get drawn into a sect. How good it all sounds in the beginning, but how the control of the group and fear within the members gradually increase. The cult-leader is portrayed in an enthralling way, and anyone who has been involved with a charismatic person, who constantly demands attention, will recognize Franz Oswald´s character. If you furthermore, voluntarily or involuntarily, have been the victim of someone who had an unhealthy obsession with dominating others, you will get shivers of recognition when the web of control is pulled tighter around the staff at Fog Island.”

”Mariette´s escape from the Scientologists sounds like a thriller. Now she has plowed down 25 years of cult-mentality into her debut novel, Fog Island.”

”A book that is timely, interesting and more and more suspenseful the further into the story you get."

”A well written and very suspenseful debut novel. Mariette Lindstein can definitely write and hopefully the next parts of the trilogy will be as well written as this one.”

“Suspense and fascination that turns into horror and panic. Fantastic intrigue. A perfect Xmas present and a beautiful design.”

The blog: Pockethexorna, (The pocket witches).

”A very suspenseful book that makes me long for part 2.”

”A riveting book that I recommend to everyone. The story unfolds at breakneck speed all through and is almost impossible to put down.”

”This is the best book I´ve read in a very long time. Mariette Lindstein delivers an incredible story.”

”An incredibly suspenseful book that´s most definitely worth reading.”

“One of this falls best reading-experiences. I would not leave out one single page of this book. Incredibly well written!”

Niclas Christoffer, author of the book ”Like Zlatan but better.”

“Don´t miss this novel! It´s easy to read, you´re sucked into a whole new world. Frightening, some of the most terrifying stuff I´ve read, completely without any supernatural elements.”

”A thriller, filled with horror, that keeps you in a stranglehold until the whole book is finished.”

”A nerve-wrecking story that really needs to be told. Mariette Lindstein has written an AWESOME book.”

Joanna, the blog: The Book Circle

“This writer knows the stuff she´s writing about. An enthralling book that also gives insight into the “cult-phenomena”.

“I really want to read more about Sofia Bauman and look forward to the coming books in this series. I recommend this book to everyone. It gets the highest possible score from me.”

"This is the first in a planned trilogy and I will certainly read the next book.
If you have any interest in cults then this is worth reading or simply read it as a modern day thriller that is different to the usual crime thriller." - Elsie Pardon, Amazon review

"It had me hooked from the first page. I just wanted MORE as the story went on. It's realistically scary - and it's not your typical thriller. It felt like this was something that could actually happen to someone!" - Savvy Reader

“It feels authentic because of the high quality fiction. Scary from the very prologue.”
Amsterdam newspaper. The Netherlands

“A mesmerizing thriller! The suspense just increases. The reader gets the heart in the throat. Exciting scene after exciting scene unfolds until you can’t breath. It is so exciting you wonder if the film rights already have been sold.”
Scriptgirl blog. The Netherlands

“What makes it so thrilling is not ‘Who did it?’ but “How far are they going to go?’
It totally captured me.
Blog. Stralend Scrijven . The Netherlands

“It gave me goosebumps. I read it obsessively. I could not put it down. I could not stop turning the pages!”
Read Junkie blog.

“It captured me from the prologue. The suspense just increases by the minute.”
Thrillers and More. The Netherlands

"Lindstein has a a wonderful way of writing. The story is full with suprising twists. She really knows, like no other, how to capture the reader’s attention. With Children on Fog Island Mariette Lindstein has written a worthy finish to this fantastic thrilogy!” - Thrillzone, book blog The Netherlands – Thrillzone also named Children on Fog Islandone of the top thrillers of 2018

“I loved it… terrifying” Lisa Hall

”A fantastic, interesting and tense thriller that I couldn’t put down. I’m intrigued to see what happens in the next books” – Charlotte Walker

”The story of an intelligent young woman’s venture into a cult and how she ends up running for her life from the madman leader.” – Nicola Kingswell

”An eerie psychological thriller set on a remote Swedish Island and based on the author’s real-life experiences living in a cult.” – Jo Marie

”How do you know when you’re in a cult? Answer, when you can’t get out!” – Kerry Bridges

"10 stars out of 10 possible.  I have read it twice now. I recommend everyone to read this series in order to understand the mechanisms that make a cult. Warning: The psychological supense thread created by the author makes every nerve in your body shiver while reading”– JESZCZEROZDZIAŁ – Book blog

“5 stars. I completely devoured this novel. Everyone and anyone who is interested in cults and how they work (this one is fictional) really should read this suspenseful book! I really recommend it”

“4 stars. Mariette Lindstein depicts the environment so skillfully. The story begins in a slow pace only to shift as the tension in the book changes, while you start to question what other cruelties Oswald can come up with for his members. The setting becomes oppressive and gloomy on the little, mostly foggy, island and it all matches the events in the book.”