To the Last Drop (Till sista droppen) 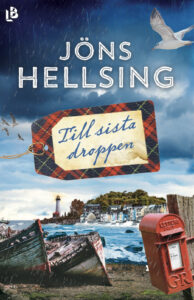 Great Britain 1984. Far out in the Scottish archipelago, Heather MacDonald fights to save her inherited pub. The boyfriend's drinking threatens the alcohol condition and the roof is leaking in the autumn rain. Soaking wet hoteliers in the attic arouse dreams of a new era of greatness, but the municipality says no to the building permit. The mighty Lord Winsley also turns out to have plans for a dilapidated fishing village with Hope Island's best location. Yes, for its entire inherited island where tenants and taxpayers are on the verge of being deceived. However, the Lord forgets that a MacDonald never gives up without a fight.

To the Last Drop is a wet story about English power hunger and Scottish thirst for freedom. The book is a stand-alone prelude to Jöns Hellsing's acclaimed Hope Island trilogy and takes place when Thatcher, the coal mining strike and Charles and Diana's marriage make Britain rumble.

"The book is so well written that the pages just fly by. I love how 80s British news and scandals blend nicely and easily into the story.”– Bokdaling

"Feelgood and social criticism in a nice mix. A deep love for the Scottish landscape and its indomitable inhabitants shines through Hellsing's writing"– ölandsbladet magazine

"Hellsing has written an entertaining novel about the importance of holding on to your dreams and not forgetting your history. He writes freehand with a good drive and a fine feeling for characters and environments. A feelgood read that stands up well in the competition.” Btj Library services no 22 , 2022

Reviews previous books in the series: