Giving voice to profound wisdom in our time 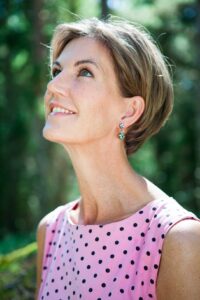 Kajsa Ingemarsson started her writing career in 2002 and has become one of Sweden's top bestselling, and also internationally successful, novelists. Today she is one of the leading figures within the field of transformational writing and new esoteric thought in Scandinavia.

Starting of as a novelist, her first seven books were huge bestsellers in Sweden, with international rights sold worldwide. The book Yesterday’s News, that in Sweden alone has sold over 800.000 copies, was turned into a major motion picture in 2013. In Germany, Wheel of Fortune was on the Der Spiegel top 10-list for months, and in Italy Yesterday’s News is already called a modern classic.

Her style as a novelist is modern, fluent and catching, and her ability to turn everyday life-stories into high quality pageturners – as well as providing hope for the readers by pointing out that life can always change for the positive – has gained her a large and loyal audience.

In 2013 Kajsa Ingemarsson entered the field of non-fictional writing. In the groundbreaking trilogy Way of The Heart, she gives room to profound wisdom in our time, providing a modern, fascinating and crystal clear voice of new esoteric thought for those who do not resonate with spiritual clichés and quick-fix solutions. Her teachings are not fixed in any religion, yet echo of many spiritual and mystic traditions. She has been compared with transformational writers and thinkers like Eckhart Tolle, Deepak Chopra, Carolyne Myss, Cheryl Richardson, and Elizabeth Gilbert. Way of The Heart has been likened to A New Earth (Tolle), as well as A Course in Miracles and Conversations with God (Neale Donald Walsch).

Although Way of The Heart is advanced in content, Kajsa has kept her style simple, easily accessible and down-to-earth, making use of her talents and skills as storyteller to invite the reader into the mystery of life. She brings a lot of life experience into her writing, which she generously shares with her audience, bringing a new and empowered voice to the stage, one which inspires and challenges the reader to look within for answers.

In 2016 she advanced yet another step as an author, returning once again to the field of fiction. Waking with Isobel, is a beautiful and mesmerizing tale beyond time and space, a unique book deeply rooted in the tradition of epic storytelling, related to such writings as The Prophet by Kahlil Gibran, The Little Prince by Saint Exupéry and The Alchemist by Paolo Coelho. Walking with Isobel has every quality to make it a true classic.

In 2021 her new novel Count of Eternity will be released at LB förlag. It is a thought provoking fantasy. It is as entertaining as it is filled with hope, love and timeless wisdom.

Besides being an author, Kajsa Ingemarsson is also a much-appreciated inspirational speaker and teacher. During the last few years, she has become a spokesperson and major inspiration in the field of new esoteric thought, and her lectures, workshops and retreats are constantly fully booked.

Before her debut as an author, she worked in radio and TV, often giving room to her humorous side, which – besides being a great stylist – is often detected in her writings as well. Previous to that she pursued a career as a translator from Russian, working for many years for the Swedish counterespionage and Foreign Ministry.

Kajsa lives in Stockholm, Sweden, with her husband and two teenage daughters.

You can find out more about Kajsa by visiting her website, http://kajsaingemarsson.nu/

"Your book gave me power and courage to keep my dreams alive!"

"You have written one of the best books I ever read."

"The book is an easy read masterpiece that witness about insights in what is hidden, and wisdom of what we know about a respectful love. A book that everyone can learn from."

"The book affected me strongly and I think it is fantastic. You write so well, I like your language and I also cried a few times."

"A few Swedish authors makes me run to the bookstore. You are one of them. Totally fantastic!"

"Oh, Oh, don’t know what to say…I am totally taken after a page turner read of your book Somewhere Within Us. It touched me in so many ways och made med cry several times. How full of insight you must be, and a fantastic author who has written such a super good book!!!!"